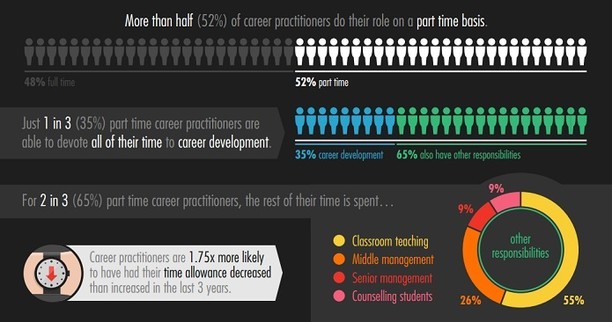 Teenage unemployment hits new high: Where are all the careers advisers?

One in five unemployed Australians is a teenager. So who is responsible for guiding them into work?

Australia’s youth jobless rate reached its highest peak since 1998 last month, with 14.2 per cent of 15-24 year olds looking for work.

While we may not have reached the figures being experienced in Greece or Spain just yet, research released this week by the Career Industry Council of Australia (CICA) and McCrindle should be cause for concern: it shows that in-school careers practitioners are considerably underfunded and time poor.

When you consider the situation for careers advisers alongside the federal government’s decision to discontinue funding for careers websites myfuture and the National Job Guide, it’s no wonder 15-19 year olds are struggling to find a sense of direction. It would seem too many students are left to make these important life choices on their own.

So where are all the careers advisers? The CICA and McCrindle research have revealed that over half of all career practitioners are working part-time in their roles, and that just 1 in 3 are able to devote the entirety of their time to career education and guidance.

Lack of support is a concern shared by careers adviser Penny Morrison, who sees the impact of reduced funding first-hand: ‘It mostly boils down to having the time to put the ideas into practice. If you have an innovative idea, you can’t just run with it. You need to get someone to replace you for the day.’

Image courtesy of McCrindle and CICA

There has been valid concern amongst the VET and tertiary education sectors lately about disreputable training organisations signing up students with little or no regard for their educational outcomes. One of the most important roles of careers advisers is to point students in the direction of appropriate courses that will get them into jobs that are in demand, and Penny says she’s concerned that student resources aren’t being supported:

‘There’s a big problem with the reliability of resources. Careers advisers don’t have the time to validate all the information that comes to them. If there aren’t free, impartial resources for the students to get an idea of the career paths that are out there then some of the limited discretionary funding we have to go into purchasing those resources and less will go into programs to get them into jobs.’

Penny cites the success of a previously government-funded program that helped to support at-risk students by putting them into an online Certificate II in Work Skills through OTEN. This gave the students who needed it the confidence to step into a work environment.

Timely and sensitive career advice can set a student up for success and give them the confidence to make their first moves. Paolo Garcia still remembers the advice that set him on a path for life:

‘I was 16 at the time, about to enter my senior years of high school and there was a lot of pressure to choose the right subjects. As a kid, this was probably the most important question I ever had to answer. “What am I going to do with my life?” For the first time I had to think beyond school life and take the decision seriously.

I was an average student who excelled in only a few subjects in year 10 (art, computers and geography). I thought I might like architecture, because it sounded cool. That’s about it! I got to sit down and talk with an adviser about my subjects and eventually what career to concentrate on.

The adviser looked at my grades, asked me a few questions as to what I enjoy… I liked art, but I wasn’t the best drawer, I liked computers, but I wasn’t a computer geek. I liked learning about different countries, but I wasn’t going to be a pilot. He suggested graphic design – I had no idea what the hell that was at the time. He suggested a subject to take (visual design), but it wasn’t even going to count towards my UAI. I had to think, do I really want to be doing extra work? I’m not going to get any free periods! But the adviser sparked my interest into this ‘graphic design thing’ and I decided to take his advice.’

Paolo topped his class in visual design, went on to study at the University of Wollongong and then the College of Fine Arts. Now in the ninth year of his career, he has worked in Sydney, London and now New York, for companies such as the National Geographic Channel, Discovery Networks, BT Sport, Animal Planet and ESPN, and has won over a dozen industry awards. For Paolo, that piece of advice changed everything:

‘Nowadays, I can honestly say, and without hesitation, “I love what I do.” It’s a passion where the lines between work and life have blurred together and it wouldn’t have happened if that careers adviser didn’t convince me to give up my free periods in high school.’

Not everyone has had Paolo’s experience of getting the right advice at the right time. But with the current state of affairs, we could be faced with a generation of students who simply cannot navigate their own way into the workforce, let alone a rewarding career.

Researcher Mark McCrindle describes this generation as the ‘most digitally supplied and globally connected generation in history,’ noting that they also face more post-school options than any generation before them. How can we expect them to do it themselves?

Did you get some life-changing career advice when you were at school? Let us know.

Still looking for some direction? Take a look at our range of online courses.