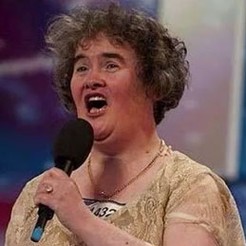 The Boyle effect at work

Unless you’ve been living under a rock, you will have heard of Susan Boyle, the middle-aged Scottish woman, dubbed ‘the hairy angel’, who became a global sensation when her astonishing performance on Britain’s Got Talent was posted on YouTube. The video has exceeded 100 million hits and multitudes from around the world have been moved and delighted by the underdog who became an unlikely star almost overnight, thanks to the wonders of viral video.

Even though Boyle didn’t go on to win Britain’s Got Talent (she came second), we can nevertheless revel in her unexpected success. But the question remains – why were we, like the judges on the show, all so surprised? Is it because of her ‘frumpy’ appearance and the fact that she wasn’t young, glamorous and packaged in the way we expect ‘successful’ people to appear?

The same phenomenon may also have been at play, at least to some extent, in our initial response to Julie Goodwin, last year's winner of MasterChef Australia. Not that there’s anything wrong with Goodwin’s looks – only that the matronly, on-the-verge-of-a-nervous-breakdown Goodwin may have seemed like an unlikely winner compared to some of her younger and more polished competitors.

Our initial assumptions about people like Boyle and Goodwin highlight an interesting phenomenon which has been demonstrated in numerous scientific studies, referred to as ‘the beauty premium’ in a recent study published in the Journal of Applied Psychology.

Basically, we judge attractive people more positively – deeming them to be more intelligent, more talented and more deserving of reward. Attractive people are treated more favourably and experience more positive outcomes – and that includes job outcomes. Taller men receive more promotions, while those judged as plain have been shown to have lower incomes.

Also at work is the fact that those who receive deferential treatment from a young age often go on to develop greater confidence and self-esteem, and this in turn generally leads to better employment outcomes. It becomes self-fulfilling prophecy.

It hardly seems fair, but this process occurs largely unconsciously and it’s something we should try to be aware of, both in ourselves and others. Employers need to be especially vigilant against this beauty bias (also known as 'lookism') when recruiting, as it has been demonstrated that decision-makers privilege attractiveness, regardless of other job-relevant information they have about the people they’re judging. That may mean they pass up a more deserving and suitable candidate for someone who is more physically attractive.

In any case, people like Susan Boyle and Julie Goodwin can give all of us hope, as well as reason to reflect. Against the odds, their talent has been recognised and they have risen from obscurity to become unlikely, but deserving, successes.

Have you witnessed, suffered from, or been guilty of lookism in the workplace? Leave a comment below and tell us about it.