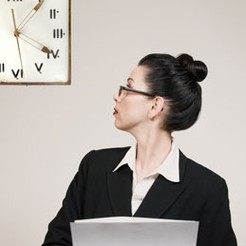 The 9-to-5 day could be a thing of the past as workers start clocking on at different times to ease peak-hour gridlock, save on petrol and boost work–life balance.

In a new report by James Calder in Connecting Cities: City Regions, a 14-hour work day has been put forward as an answer to 21st-century demands.

The idea will be discussed at the 9th World Congress of Metropolis, a meeting of world city leaders to be held in Sydney later this year.

‘The 14-hour working city would enable early and late shifts – work times would overlap to spread movement across a greater number of hours during the day’, James says.

‘This may increase productivity for workers and organisations, increase utilisation of public transport, roads and office buildings and end the peak-hour rush.’

The idea is the latest in the long list of innovative work timetables that are being debated and put in practice.

In the American state of Utah, the four-day working week has been implemented as part of a year-long experiment.

State employees work from Monday through Thursday from 7 am until 6 pm – putting in the usual 40 hours spread over four days instead of five.

Employees get a longer weekend and save money on commuting costs while companies save on the cost of electricity.

However, the critics argue that there are serious drawbacks to cramming more hours into a workday.

Morale and productivity could decrease as employees work over eight hours a day, and the saved petrol and electricity dollars could get splurged over the weekend.