Are You Being Conned?: The Truth About Internships

A simple search of the internship/work experience category on Pedestrian Jobs reveals hundreds upon hundreds of results, each boasting the unrivalled opportunity for the ‘right candidate’ (read: prospective doormat) to get a foot in the door of their dream job. There’s just one catch. Salary: $0.

With youth unemployment reaching an unprecedented average of 12.4 per cent, more and more young people are turning to unpaid internships in a last ditch effort to bolster their career prospects. In many industries, most commonly the creative arts, interning is fast becoming par for the course.

But is it really worth it for that throwaway line on your resume?

When I first reached out for people to come forward with their experiences, I received some pretty harrowing tales. People who’d been relegated to the role of coffee-runner, several who’d wound up answering phones all day, and, believe it or not, even someone who’d been left to amuse themselves with colouring books.

Perhaps even more worrying than this unscrupulous division of labour are the countless stories of those who carry out legitimate, revenue generating responsibilities in exchange for squat. In its outspoken article, The Hoopla even reports instances where interns have been billed out at hundreds of dollars an hour, without ever seeing a dime for their efforts.

The fact of the matter is that not all internships are created equal, and many of those who eagerly volunteer themselves as free labourers find themselves at the mercy of disorganisation, humiliation and exploitation.

So what can we do about it?

At the crux of the problem is the fact that young people often find themselves looking down the barrel of a gun when it comes time to transition from study to employment.

‘Many young people are intimidated to question the status quo because so many employers are now recruiting unpaid interns. Sometimes they internalise their failure to find a job as their own shortcoming, without realising how systemic the whole situation is,’ says Deputy Director of Interns Australia, Colleen Chen.

Having studied communications at uni, I’m no stranger to the ‘internship expectation’ that runs rife throughout the industry. Watching so many of my peers wilfully sacrifice themselves at the altar of The Intern served as a sort of subconscious coercion, and eventually, I found myself following suit. Not because I’d scored a role with my dream employer, or because I thought the opportunity was going to cement my career in the industry, but because everyone else was doing it.

Unfortunately, this zombie mentality is shared by a vast majority of students and graduates. Hell, most of us don’t even know what our basic rights and entitlements are when it comes to slogging it out in an internship.

So, before you next throw your hand in the air for that ‘life-changing’ internship at a high street fashion label, do yourself a favour, and get your facts straight.

It turns out that there’s a pretty reasonable chance that the internship/s you’ve been involved in haven’t been entirely above board. At present, the whole thing is so poorly regulated that most participants and their employers are completely unaware that unpaid internships are actually a big no-no, except when conducted according to a strict set of guidelines. 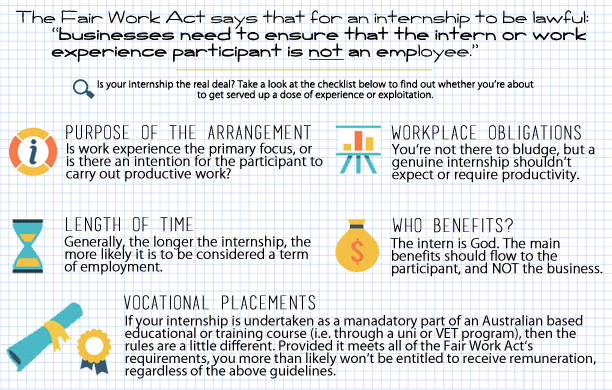 ‘Some employers will try to write off the value of a young person’s labour by referring to their lack of experience. However, as menial and basic as some intern tasks may be, it is still deserving of minimum wage because it is displacing a paid position,’ argues Chen.

Ever written free copy for a company’s website? Designed a logo or some marketing material? If the business has gained significant benefit from the work you’ve undertaken, then it’s likely that they’ve violated the requirements laid out by the Fair Work Ombudsman, and could cop a fine exceeding $50,000.

Rather than point the finger solely at the big bad corporations of the world, it’s time to take collective action to achieve more widespread awareness of what’s fair.

If you’re about to embark on an internship, the following checklist from Interns Australia should help you ensure that you’re not being exploited, undervalued, or simply wasting your time:

‘We would like young people to be able to identify when the line between experience and exploitation has been crossed. We would like them to know that they have options other than giving up their labour for free and that there are groups like Interns Australia who are ready to stand up for the exploitation of young people,’ says Chen.

‘If there is no collective pressure, businesses will only start a race to the bottom, and the already few entry-level positions will diminish even further.’

When done right, internships have the potential to provide genuine insight into your chosen profession, and can often open doors to a range of opportunities. Just remember, though, becoming an intern need not be a rite of passage.

‘Sometimes, starting up a small project with friends and colleagues can show much more initiative and leadership than to say that you had been a serial intern for many years where you did data entry and posted pictures on social media most of the time,’ enforces Chen.

There are plenty of other fish in the sea of career opportunities, so never feel pressured to resort to a stint as an unpaid minion (particularly if, like most regular 17 to 24-year-olds, you’re already subsisting on mi goreng).

Above all, stand up for yourself, because we could all afford to learn a lesson from Parks and Recreation’s sardonic intern, April Ludgate, and adopt a little more cynicism next time we’re asked to empty the entire floor’s rubbish bins. 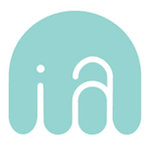 Interns Australia has recently joined forces with Unions NSW to launch a parliamentary enquiry into unpaid internships and work experience. They’re calling for any employer who takes on an intern to be required to sign a code of practice ensuring adequate supervision, a formalised program structure and that the work undertaken would not otherwise be performed by a paid employee.

For more information on how to get involved, or to take Interns Australia’s National Internship Survey, visit their website.

Still not sure whether to make like Hannah Horvath (she may not be the voice of a generation, but she sure gave exploited interns a voice when she did this), and work for free?

This should help you wrap your head around it. [Language warning] 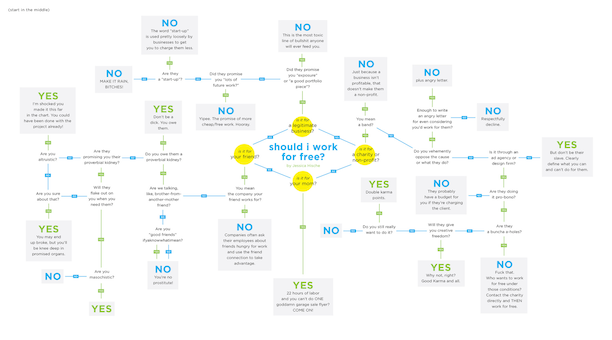