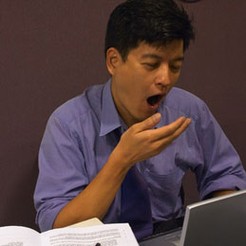 Australians work the longest hours in the developed world, with an average of 1855 hours at work each year, which is 200 hours more than employees in other countries, according to a study by the Australia Institute.

Further, one-third of Australians do not use any of their annual leave.

One-fifth of Australians work more than 50 hours a week, according to another study, by The University of Sydney.

These worrying figures suggest there is more 'work' than 'life' in the work-life balance for many Australians.Job insecurity and a more consumer-oriented and materialistic society are the main reasons for the long hours worked, believes Director of the Australia Institute, Dr Clive Hamilton.

He said on ABC radio that people are starting to realise that working much overtime is not always the best way.

'There's more to life than long hours of work and more and more Australians are understanding that and are scaling back their material demands and the work regiment they impose on themselves and are starting to live the old Australian myth of enjoying life more, spending time with family, friends and doing that thing you always wanted to do,' said Mr Hamilton.