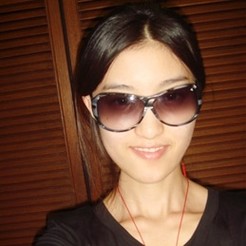 'Australian food is too full of oil! There are no spicy foods in Australia, which was hard to adapt to. And Vegemite? It’s not food at all!'

Chen Yining is studying in Australia on an exchange program. Originally from Changchun in China, Chen, 22, is currently studying Business Studies at Charles Sturt University in Bathurst.

She had never travelled outside of China before she flew Down Under so the local food and culture was a bit of a shock. Her recommendation for other international students? An alcoholic beverage or two can help break down those language barriers!

What were you doing back in China before you came to Australia? Why did you decide to study here?

I was studying business in Chanchun, and I wanted to improve my English. My mum encouraged me to go on exchange.

Was it hard to get a student visa?

No it wasn’t hard. The process to apply for a visa is just a lot of paper work – very annoying.

What was your English like before you came here and was it difficult to pass the English test?

I’m not good at speaking – that's the part that needed more practice and preparation.

Did you have any particular concerns about coming here beforehand?

Can you give some examples of foods that you have found horrible? Have you ever eaten vegemite?

Everything is too full of oil! There are no spicy foods in Australia, which was hard to adapt to. Vegemite? It’s not food at all!

Well, it’s not really that bad. I can still enjoy Australian food – it’s just that I miss Chinese food.

What were your first impressions of Australia? Is it what you expected?

It’s like a big, big green park with trees and grass everywhere, but there are not many people. My first impression of Australia was it’s clean, friendly, warm, and suitable for living.

So is it much more green and natural in Bathurst rather than Changchun? Is Changchun a big city?

Yes, Bathurst is far more natural than my home. Changchun is comparatively a big city in China – the twenty-fourth biggest city in China, which as you know has countless cities. Changchun is really crowded and the climate is horrible, which means it’s extremely hot in the summer and freezing cold in the winter.

How was the process of fitting into university? Was there support from the uni to help with the transition?

All you need is time and effort from yourself. There is support from the uni, but it also depends on your own effort.

Have you been involved with the international students’ association at your university? Have you made lots of friends?

Yes, I tried to get involved with them but it’s hard to make good friends, the language barrier is still there and I need more time.

How did you find accommodation?

I applied for on-campus accommodation from the uni before I came here.

What’s the best thing and worst thing about living on-campus?

The best thing is you can communicate with foreigners as much as you want – everything is convenient. The worst is that sometimes it’s noisy, but I love living on campus anyway.

Are you glad that you chose Australia?

Yes, it was a smart choice.

What has been the best part of the experience? And the most difficult?

The best part is you can travel around during the holidays. The most difficult is it’s not easy to catch up with some of the class.

Where have you travelled to in Australia?

So far, just to Sydney. Sydney is like Hong Kong – I mean, there are lots of Asians and it's a busy city.

What are your plans after you finish your studies? Are you planning to use your qualification back home, stay in Australia or go to another country?

I’ll go on with my postgraduate studies in Australia.

What advice can you give to people considering coming to Australia to study?

If you love drinking, that's the best way to make friends! And just ignore what I said before, the language barrier is not a big deal!