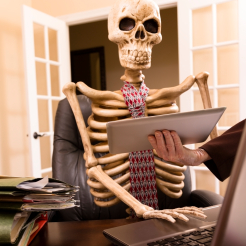 Death of the career

I used to work at a local newspaper that had been running since 1856. It was my second full-time job out of university and I’d just come from a marketing agency where the pace was fast and the staff turnover was even faster.

So you can imagine the contrast when I started to discover the work history of some of my new colleagues. Or should I say lack of work history, at least in terms of breadth of experience. Quite a few of my co-workers had been there for longer than I had been out of school … primary school, that is. Yep, there were a few who had been there for over 20 years and, at last check, they were still working there.

It should come as no surprise that these particular staffers were in their 60s and held the quaintly old-fashioned view that you have one job until the day you retire. Now I’m not saying that all those from older generations think this way – there are definitely some mould breakers. My own mother, for example, had been a receptionist for her entire working life but decided to retrain in childcare on the eve of her 50th birthday. The fact remains, though, that once upon a time, having one job for life was the rule and not the exception.

In the words of Bob Dylan, the times they are a-changin’. These days, the notion of a ‘career’, especially one for life, is all but extinct.

I was once told by a friend in the ad industry that an advertising creative (art director or copywriter) can expect to be made redundant at least six times in their professional life. This is a result of the transient nature of advertising work, with agencies losing and gaining big contracts all the time. Chances are, no sooner are you made redundant than you will be headhunted by another agency that just scored a huge account. All of a sudden redundancy is not necessarily the death sentence it once was – in fact, it can sometimes be a rebirth, or at least only a minor blip.

Continuing professional development and diversifying throughout your working life are the keys to making yourself continuously hireable. Now I’m not recommending you lead the life of a professional nomad, as loyalty is still a highly valued quality in any employer’s eyes. But don’t let your skills go stale by not challenging yourself and simply staying in the same role, doing the same tasks – because, well, that’s just what you do.

There are certain skilled professions where variety comes from the nature of the work, rather than the need to retrain. Teachers, for example, might change schools or the year or subject they teach, but are unlikely to jump around industries. That said, a previous colleague of mine working in a marketing role was actually a trained PDHPE and early childhood teacher who decided to make an occupational sidestep in her mid-30s. There really are no rules when it comes to your professional pathway anymore.

So what does this mean? Essentially, the professional world is your oyster and any decision you make is never set in stone. This isn’t an excuse to be occupationally frivolous, however, so here are some tips to help you stay at the top of the recruitable list.

Learn the difference between a bad day and a bad role

We all have good and bad days in the workplace. Don’t mistake a particularly tough work week for the need to hand in your notice. I was once told that the key to a good job lies in the balance of the role itself, the remuneration and the people you work with. Priority should be the role and how it helps you develop professionally, but if at least one of the other elements are also in your favour, then your job is fairly well balanced – so time to shred that resignation letter.

Make the most of any opportunity for professional development, regardless of whether you think it’s relevant to your current role or not. You never know when you might need those skills.

Make friends with a recruiter

Even if you’re not actively looking for work, it’s a good idea to become friendly with at least one professional recruiter. They will see where your skills are best suited and be able to make recommendations if and when you decide to move on to greener pastures.

Have you ever changed from one job to something completely different? Why not share your story with us in the comments below.

And if you’d like to retrain for a different industry, we have you covered with our range of online courses.