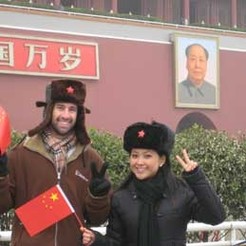 Helen studied part of her Asian Studies/Law degree on exchange in Beijing and learnt more than she expected about Chinese culture and lifestyle. We spoke to her about what it was like living in Beijing during the lead up to the Beijing Olympics.

What's the atmosphere like in Beijing leading up to the Olympics?
The city is on fire with Olympic fever at the moment. As cliched as that sounds, it's incredible just how excited the Chinese people are. Olympic fever is splashed all over billboards, TV, T-shirts and pretty much everything else! It definitely resembles the hype leading up to Sydney Olympics, if not more.

How has the city changed for the Olympics?
Beijing has had an enormous facelift leading up to the games. It has mainly been a 'clean-up' of the city with the government clearing the streets of homeless people and street vendors. They've also done a general clean of the city – clearing rubbish and planting a lot of trees to make the city green and reduce the amount of pollution.

What's it like living in Beijing?
Beijing is a very organised city. It's a city with a good mix of culture from the traditional Chinese, the communist Chinese to the international community. It's a pretty clean city minus all the development and construction going on. There are differences in social etiquettes, which you need to adjust to. One example is the Chinese don't say 'please' or 'thank you', not because they are rude but because it's not in their culture to do so.

Did anything about Beijing surprise you?
How international and modernised the city has become in the last five years, since I last visited. You can live here without immersing yourself in the Chinese way of life because of the vast international influence and the abundance of foreigners.

What is the best thing about Beijing?
Beijing is a fantastic hub of international and Chinese cuisine, from Salt, a very famous contemporary restaurant in Beijing to Da Dong, China's most famous Peking duck institution. You'll often stumble across a new gem of a restaurant, bar or cafe down a little hutong, a small alleyway. There are so many you wouldn't believe – it's insane!

What is the worst thing about Beijing?
Pollution. The traffic here is just constant.

Why did you choose to study overseas?
I'm doing an undergraduate degree in Asian Studies (Specialist)/Law at the Australian National University. Part of the course program is to complete the Year in Asia Program. I choose to study in China because I want to major in Chinese and Political Science.

How does studying in Beijing differ from studying in Australia?
Students here are extremely focused on studying and they study hard. It's obvious that Chinese students take their university studies very seriously, much more seriously than students in Australia, because gaining a place at university is a very difficult process.

What is the university life like?
In terms of social events – parties in the top universities in China are rare. There are a lot of extracurricular activities that you can join, but the students take these very seriously as well. I've joined an orchestra and I was involved in a university stage production of The Tempest directed by an American.

What has been the most memorable part of your time in China so far?
Travelling has been the best part of this year. I've travelled through China to places such as Henan, Shanghai and Hangzhou but the highlight has to be going to Mongolia. It's such an amazing place and has remained unchanged since the time of Genghis Khan.

Going to the Mongolian Siberian border was a fun experience. The people there still herd for a living and all I remember is returning home smothered in the smell of mutton. They've got this obsession with sheep and goats – it's crazy!

What have you gained from living and studying in China?
It has enriched my knowledge of Chinese culture and language. I can now speak Chinese fluently and can have informed intellectual debates in Chinese. I can also translate professional documents, which increases my employability here in China.

Are you interested in pursuing a career in Beijing?
Yes, but only for a few years. I wouldn't want to settle down here. I need somewhere warmer and a beach!

I would love to work in either law or policy in the area of humanitarian law, criminal law or international affairs. I'm especially interested in working for the United Nations.

What's the most important thing you've learnt while studying abroad?
I've learnt that I can adjust to places well and have no difficulties dealing with cultural differences. It has also affirmed that I'm quite an independent person.

What do you wish you had known before going to Beijing?
I wish someone had told me just how cold this city gets during winter! And that even though Beijing is an international city, it is very much still part of a developing country, so there are squat dunnies and pit toilets in a lot of places!

Would you recommend studying overseas?
Exchanges are amazing and fun. You get a lot of time to do other things such as travelling, but it also gives you time to reflect on your life and learn things about yourself you wouldn't have otherwise known. I'm really enjoying my time here, being surrounded by other exchange students. We're all pretty chilled out about studying – having fun is definitely the general code for students studying abroad!