How Much Do You Need To Earn To Be Happy?

Go on, admit it – even though you know that ‘money isn’t everything’ and ‘money doesn’t buy happiness’ – you’re (not so secretly) hoping for a pay rise this year.

Because let’s be honest, a fat bonus cheque or a bit of a bump in your salary would make you a whole lot happier at work.

A Princeton University study has put the relationship between salary and happiness under the microscope, and it turns out that money can buy you happiness. But only up to a certain point; and that point is $93,000.

Led by two Nobel prize-winning professionals – economist Angus Deaton and psychologist Daniel Kahneman – the study found that a household income of $USD75,000 (roughly $AUD 93,000 in today’s economy*) seems to be the magic number.

As you earn more money, your happiness continues to rise, until your annual income hits $93,000. At which point a ‘happiness plateau’ kicks in.

The study explains that we experience two distinct types of happiness:

By analysing the polling data from almost half a million Americans, Deaton and Kahneman discovered that ‘everyday contentment’ increases up to $93,000, but then levels off after that. 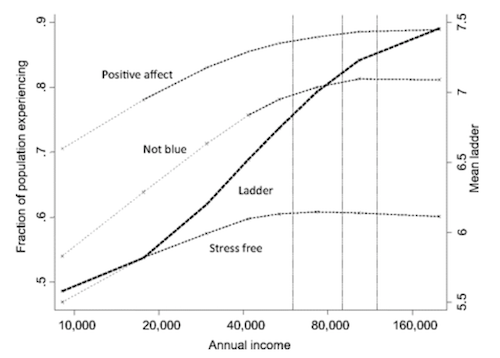 ‘Perhaps $USD75,000 [$AUD93,000 today] is a threshold beyond which further increases in income no longer improves individuals’ ability to do what matters most to their emotional wellbeing, such as spending time with people they like, avoiding pain and disease, and enjoying leisure,’ the report explains.

It appears that $93k is the point at which you no longer need to worry about money. With this salary, people don’t have to worry about everyday expenses, and have enough expendable cash to do the things they love.

Before employers rush in to cap salaries (because science says it won’t make one iota of difference to their employees’ happiness!) the researchers also found that earning above that threshold does improve how satisfied one feels about their life.

The more people earn, the higher they climb up the life-satisfaction ladder; and this appears to be a universal effect irrespective of how much you earn.

‘A 10 per cent rise in annual income moves people up [in] satisfaction,’ the authors write, and ‘the same percentage increase in income has the same effect on evaluation for everyone, rich or poor alike, even though the absolute dollar amounts differ.’

The study gives us a fascinating insight into how our salaries directly impact our emotional wellbeing. It serves as a powerful reminder that while money isn’t everything, we still use our pay packets as a yardstick for how successful we feel.

So, to put the age-old debate to bed: Can money buy you happiness? According to Deaton and Kahneman, the answer is no.

Earning under that magical $93k? Here’s how to ask your boss for a pay rise. But remember, money isn’t everything! If it’s happiness you’re after, here are six ways to give your serotonin levels a boost!

*This amount was calculated by multiplying the figure by US CPI in 2010 divisible by CPI in 2016, and then converting the USD into AUD at the exchange rate on June 2016.