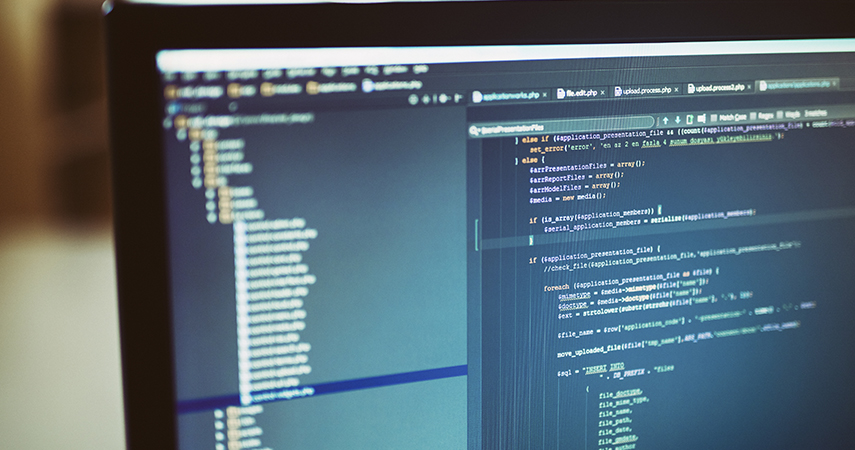 How to make a million dollars

I’ve recently turned 30 and a decade-old weight has been lifted from my shoulders. No, it’s not that I’ve bought a house. Been made permanent. Finally apologised for losing that ring of my mother’s. It’s that I have just paid off tens of thousands of dollars in HECS-HELP debt. Now that’s a milestone I believe in celebrating!

Before you bother to do the math: no, I have not been earning the big bucks. But let’s be real: I studied a Bachelor of Art History and Theory and a Masters of Arts Administration – graduation was hardly going to be a licence to dive into a basement full of hundred-dollar notes Scrooge McDuck style.

And this is certainly not a tale of woe. I consider myself pretty lucky: I have managed to be consistently employed in jobs I’ve actually wanted since I graduated and even occasionally nudged a tax bracket that I thought was reserved for people with ‘real’ degrees.

But I have to admit that I have at times questioned whether racking up all that debt straight out of high school was ever going to be worth it. And, like me, you probably wonder whether your studies will actually continue to have any effect the further you get into your career. (I know at least in the short term I will enjoy the extra $50 a week that used to go to the ATO, that’s for sure. Store-bought coffee, anyone?)

The good news is that I found some interesting answers recently in an AMP.NATSEM report entitled Smart Australians: Education and Innovation in Australia. It even talks to us in a language we all understand – dollars and cents. It states:

‘In early working life, average annual income across educational levels ranges between $48,000 and $62,000, with those obtaining a bachelor degree earning more annually than all other education categories.’

So that’s a good start, but it’s hardly news. Here’s where it gets interesting:

‘The gap between those with a higher education and those with lower education continues to widen across the life cycle, with people holding a postgraduate degree surpassing those with a bachelor degree at around age 35–39 years.’

‘A person with a postgraduate degree will earn more than $3.17 million over their lifetime, almost 1.8 times the projected lifetime earnings ($1.74 million) of a person with just Year 11 or less education.’ 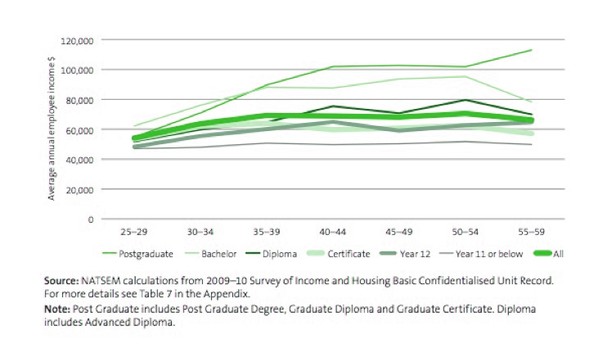 So that decade-long coffee allowance is starting to sound like a small sacrifice, really. Even the Scrooge McDuck reference is sounding less ridiculous at this point. And the higher earnings aren’t just for postgrads, either:

‘A person with a bachelor degree will also have a high return on education, earning around $2.9 million over their lifetime, or almost 1.7 times someone with Year 11 or below.’ 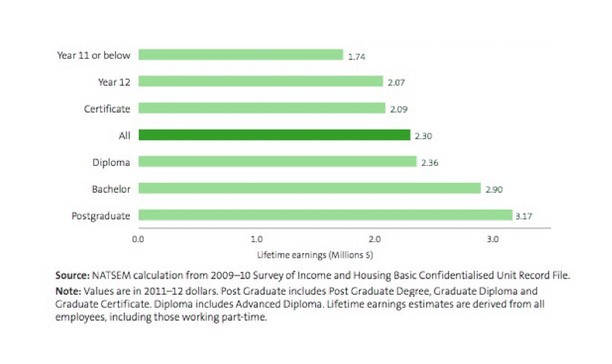 Before you start to think I can’t see past the dollar signs in my eyes, I know what you’re thinking: yes of course it does make a difference which industry you work in. For example, hospitality workers earn a mere $1.6 million on average, where high-skill industries such as engineering would earn nearly $3 million over their working lives. However, even within the same industry the financial prospects of those who have the most education are markedly different. 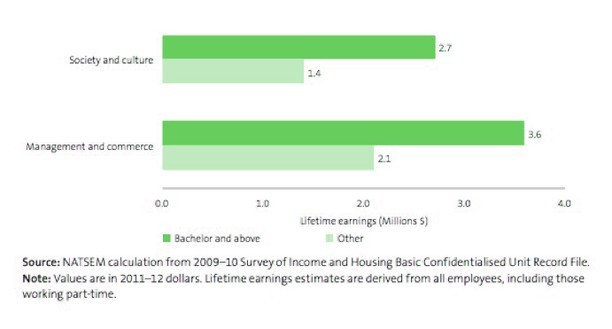 With today’s universities opening up places based on student demand, we might ask what happens when university degrees become more common, then? We’re already seeing graduates in some areas such as Veterinary Science struggling to find positions. The answer may lie in the value of education in encouraging higher thinking. Professor James Arvanitakis, Head of the Academy at the University of Western Sydney and recipient of the 2012 Prime Minister’s University Teacher of the Year award, pointed to this on Radio National’s Life Matters program last week:

‘Most degrees should have two aims: the first thing is to learn the skills that you need for a job – study accounting to become an accountant … A good degree also gives you the second thing: you learn to learn – that ability to critically think, to confront challenges, to work across issues, to see the problems in a slightly different way – and I think that’s what a degree has to give you, it has to give you both of those things.’

Bruce Guthrie, Policy and Strategy Advisor at Graduate Careers Australia, also responded to the prevalence of degrees, noting an increase in the number of people doing postgraduate study, particularly masters by coursework and graduate diplomas:

So the pressure to be qualified is only increasing and, as Guthrie points out, the current reality reflects this, with unemployed non-graduates already doubling the number of unemployed people with degrees. In today’s knowledge economy Australia needs a nimble, educated workforce to take advantage of changing opportunities. And with such a widening gap between skilled and non-skilled workers, perhaps the question becomes not whether it’s worth doing further study, but whether you can actually afford not to.

If you want to earn over a million dollars more in the course of your working life, then I’m afraid your parents were right when they told you to stay in school. And with most university fee repayments only kicking in once you earn over $51,309, it’s a low risk, high return decision. Some would say a no-brainer. Getting into debt is starting to look like the best thing I ever did. Now what will I spend that extra million on?…

Ready to start cashing in? Learn while you earn by finding a course that you can study online. The stats show it’s an investment you won’t regret.