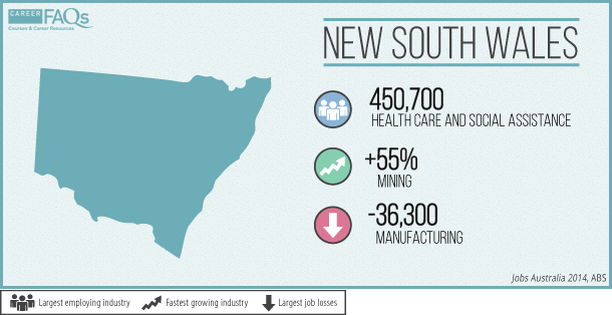 Jobs Australia 2014: Where are the jobs in New South Wales?

New South Wales has the largest workforce with almost one in three Australians living and working in the state. Over the five years to November 2013, employment rose by 206,500 or six per cent, slightly below the national growth rate of 6.5 per cent.

Around two thirds of the state’s employment is concentrated in Sydney. Outside of Sydney, the largest number of workers live in Newcastle (272,300).

The report notes that 14 of 19 industries experienced jobs growth.

Rental, hiring and real estate services was in decline in the 2013 report but has enjoyed a 16.5 per cent increase in employment in this year’s report.

Manufacturing has gone from a 1.1 per cent reduction to a 12.1 per cent wipe out.

Information, media and telecommunications has nosedived from 23.7 per cent growth last year to a decline of 19.3 per cent this year.

Where are the jobs?

Highest proportion without a post-school qualification: