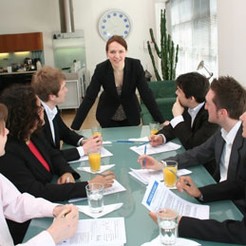 The glass ceiling is still present in Australian companies, with a new report showing the number of women in executive positions is in sharp decline.

According to the 2008 Equal Opportunity for Women in the Workplace Agency (EOWA) Australian Census of Women in Leadership report, the number of female executive managers in the country's top 200 public companies has fallen from 12 per cent to 10.7 per cent in the last two years.

That means that out of 1700 executive positions, only 182 are occupied by women.
There is just one Australian female corporate board chief for every 49 males and only 2 per cent of CEOs are women in the ASX 200 companies.

The proportion of those companies with no women executive managers at all rose from 39.5 per cent to 45.5 per cent.

The results mean Australia now trails the United States, United Kingdom, South Africa and New Zealand – a few years ago our number of female execs put Australia second only to the US.

There are a few companies that break the mould however. In Bunnings Warehouse, Austar United Communication, and Babcock and Brown Capital, women make up more than half of the senior management teams.

Shrinking executive teams and the increased number of mining and energy companies are the most likely reasons behind the reduction of senior women across the board.

The Equal Opportunity for Women in the Workplace Agency has also cited the following factors as working against women who are trying to balance family lives with high-powered careers.