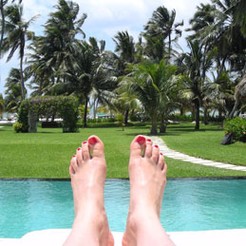 No leave, no life

Retrenchment, redundancy and recession are the three buzzwords that have thrown the 'work–life' balance, which we have been enjoying over the prosperous last decade, off its throne.

Now it's emerged that indulging in a little R&R could actually ease the pressure of the less-than-savoury three Rs.

The government is urging desk-bound Aussies to take the $31 billion they are owed in annual leave in an attempt to boost the failing economy.

Tourism Minister Martin Ferguson is joining forces with Tourism Australia to promote the 'No Leave, No Life' campaign – reminding Aussies that there is life outside the office.

According to Mr Ferguson, it's all about encouraging people to 'organise their lives at work and at home to actually have a break, and to have a break here in Australia.'

'It is the responsibility of all Australians as we go into this Christmas-New Year period to think about mates back home, to actually think about having a holiday, to go to a restaurant or a theme park, to hop on a plane, and to try to make sure we spend those dollars to assist in maintaining jobs for Australians', said Mr Ferguson.

But employers aren't going to be left out in the cold while their staff live it up on the Gold Coast with a Pina Colada in one hand and a Dan Brown novel in the other.

Workers would come back to work revitalised and more productive, plus it also saves them cash, since it would cost them progressively more to pay out accrued leave years later as wages and salaries rise.

And what better time than to go on a holiday as when the government injects $10 billion into the wallets of families and tells them to spend, spend, spend!

The tourism industry has been one of the hardest hit by the recession as Australians rethink their budgets and tighten their belts.