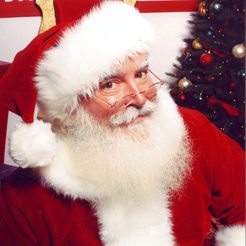 ‘There’s just no job that I can think of that is as fulfilling as what I do.‘

As we all start to wind down at work for the Christmas holidays, there’s somebody who’s just getting started. Santa Claus may seem like he only works one day a year, but there’s a lot more planning and strategising that goes into the night before Christmas than most people realise.

We spoke to Santa about what his role really involves and why he keeps coming back every year.

What’s the hardest part of your job?

My job is deadline orientated and being late just isn’t an option. There’s a lot of preparation that goes into making sure my team and I deliver on the night and we’ve become a well-oiled machine. Still, it’s a lot of pressure and all the houses without chimneys these days slow us down a bit – we still manage to get the job done though!

Mrs Claus won’t be happy with me saying this, but the cookies and milk are a definite perk. My absolute favourite part of the night though is imagining the faces of all those children around the world on Christmas morning. It makes all the planning and effort completely worth it each year.

How do you fill your time for the 364 days you’re not working each year?

Like I said before, there’s a lot of planning that goes into December 24th each year. We have to make sure that the lists are compiled, the letters are received, the presents are made and wrapped, and that the sleigh has been in for a service. I also keep my reindeer on a strict training program throughout the year so they’re up to the task on Christmas Eve.

Did you choose your own uniform or was it standard issue?

The red is standard issue but Mrs Claus has definitely added to it over the years. With new fabrics coming out as well, we’ve been able to create a suit that’s more aerodynamic for extra speed but is still as warm and fluffy as ever. It’s like going to work in really cosy pyjamas.

How do you keep your employees so happy?

That’s easy – the elves love what they do and why they do it. I also like to throw in a few extra incentives like free accommodation and food, as well as a pretty competitive health package. We are fully contained up here at the North Pole so they have everything they need. They also get plenty of time over the summer months to chase the sun and have some time off with their families.

Have you ever considered a career change?

There have been times when it’s down to the wire and I wonder whether I could use a job that’s a little less stressful. Having said that, there’s just no job that I can think of that is as fulfilling as what I do – and all the annual leave days that I get off in this job aren’t bad either. I don’t think I’ll ever give it up as long as my belly is big and my cheeks are rosy!