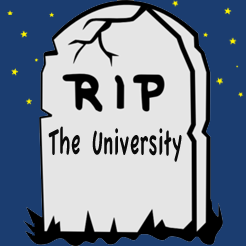 The end of the university as we know it

First there was the phonebook and the encyclopaedia, then the newspaper and the bookstore – and I’m willing to bet that the next obituary in the journalist’s drawer is for the university.

Maybe it’s overstating it to say we should be dusting off our best black suits again, but there’s no doubt the university as we know it is facing its demise. Sure, more people are enrolling and the Internet is making higher education more accessible than ever, but universities are under scrutiny, and for the first time they are competing internationally – the game has changed.

Things are heating up

In fact, the pot is close to boiling over. New Education Minister, Christopher Pyne, appears to be turning his back on his pre-election promise not to reintroduce a cap on places. This comes on top of the new Government’s removal of Labor’s targets to lift participation by disadvantaged students, their scheduled abolishment of student fees for services such as child care and career counselling, and their plan to take over Australian Research Council funding decisions.

A longer-brewing issue is that course delivery, traditionally based on bums on seats, is facing extraordinary change as a direct result of technology and the development of Massive Open Online Courses (MOOCs). Physical university places have been inaccessible to many and now anyone with an Internet connection can be taught for free by the world’s best. Education is undergoing a paradigm shift.

But what are MOOCs?

Stanford’s Coursera was at the vanguard of the MOOCs revolution, attracting 1.5 million enrolments from 190 countries by January 2012. They now have 62 partner universities and 2.7 million students studying for free, and some courses translate to real college credits.

Many universities have been streaming lectures to students for years, but MOOCs are much more interactive, with segmented lectures, auto-graded quizzes and peer reviewing. They can also accommodate unlimited students without the need for additional lecturers and tutors. And with major players such as Harvard and MIT joining forces for their MOOCs offerings, the stigma of online education being less effective is eroding.

Why is everyone so excited?

Coursera co-founder, Daphne Koller, is excited about the move away from what she calls the ‘monolithic one-hour lecture’, where students often zone out. Online, ‘every single student has to engage with the material’.

Rather than having a one-size-fits-all experience, MOOCs students are able to choose course content based on their background, interests and level of knowledge. And studies prove that the more personalised a curriculum, the better the results.

One concern for online students is that they might lack the exchange of ideas or sense of community you get on campus. But Coursera has been impressed by the number of high quality discussions on their international forums, where the average wait time for an answer is just 22 minutes. Face-to-face study groups around the online courses have also been popping up worldwide.

Big student numbers are also giving online course writers new insights into human learning, allowing them to respond directly to collective behaviours. For example, when Stanford lecturer Andrew Ng noticed that 2000 of his 100,000-strong Coursera class got the same question wrong, he was able to create a pop-up message to address the problem.

Where is Australia in all this?

Back home, Belinda Robinson, CEO of Universities Australia, has acknowledged the opportunities:

‘I think universities are looking at this with a degree, I guess, of apprehension but also a very high degree of optimism about how they can teach their courses in much more interesting ways.’

Australian universities do offer many courses online; Curtin and Swinburne universities have dramatically increased their online offerings, and Monash has joined UK MOOCs outfit FutureLearn, but our sole online-only player is Open Universities Australia, which pulls online courses in from partner institutions. They have had some success with their MOOCs venture Open2Study, but as a series of free short courses without a qualification attached, it’s more of an introduction for the curious.

Australian regulations currently prevent online-only universities from existing, and the Vice-Chancellor of the University of New England, Professor James Barber, recently called for this to change:

‘Domestically, there is no doubt that we are going into a period of contraction … but I think the bigger challenge is actually the one that is coming at us from cyberspace. That is, all of those international universities – and some of them just incredibly powerful names … that are moving their operations online, they really are coming after our students.’

Universities are now facing the fact that their local brand prestige has to compete online and in an international marketplace. Swinburne University’s Deputy Vice-Chancellor has said that the NBN rollout will lead to a ‘learning explosion’, so the time is ticking for Australian universities to get their models right.

As Professor Barber puts it, ‘I would rather cannibalise my own business than have someone else from an international university eat my lunch, which I think is likely to happen if we just sit on our hands’.

With such looming uncertainty, universities cannot afford to continue with the status quo. Failing to address the impact of online learning on their business model might just see the universities of old go the way of the dodo – or at least the bricks-and-mortar bookstore, a charming but antiquated relic from a different time.