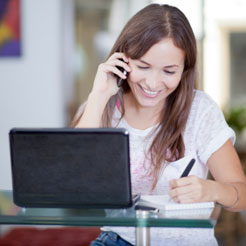 Employees want to work from home but employers still reluctant

Over the last few years there’s been quite a lot of talk about the benefits of flexible work arrangements – and one of the most notable developments in recent times has been the increasing popularity of employees working remotely from home.

Improved productivity and efficiency, reduced stress and staff turnover, improved morale – all are among the many benefits commonly cited when it comes to working remotely. And all are strong motivators for employees to push for more flexibility. Give them more autonomy, so the argument goes, and they’ll work harder for you because they can see that you trust them.

But while companies themselves seem to understand these benefits, new research by specialist finance, accounting and technology recruitment firm Robert Half suggests managers are still approaching the issue with a fair degree of scepticism – and they could be missing out on substantial potential rewards as a result.

The research, surveying over 200 HR Directors across several industries, found that 85 per cent of participants understood that non-financial benefits like flexible time have a positive effect on staff retention. Despite this, 16 per cent never let employees work from home at all, and 67 per cent only do so on a limited, employee-by-employee basis.

‘I think they’re nervous’, says Andrew Morris, Director at Robert Half. ‘They’re asking: “Are people going to be efficient?” There’s the trust issue.’

As well as nervousness about remote employees doing the hard yards, the research found that concerns over data security, lack of adequate technology and the difficulty of managing a distributed workforce were predominant factors in the lukewarm uptake of remote work policies by businesses in general.

Morris says that for cautious employers keen to boost productivity and satisfy demand for remote work from employees, the solution lies in having clear policies and setting expectations that are measurable, time-bound and specific.

‘If those sorts of things are met, you have control of what people are doing’, he says. ‘It’s just when people are allowed to work loosely at home, and they haven’t been given those boundaries, that it can turn pear-shaped.’

Part of this, he says, means having clear lines of communication beyond email such as regular phone updates, and encouraging regular ‘face time’ through methods like web conferencing and in-house social media to boost staff visibility and presence.

The importance of visibility for remote workers is supported by research conducted earlier in the year by the University of California and the London Business School that suggested that despite equal or better productivity by remote employees, supervisors might evaluate them less favourably simply because they are not actually seen. The familiarity of a face can be as little as it takes to foster the idea of staff reliability.

Morris says that despite a slow start, flexible work arrangements such as remote work will play an increasing role in the labour force of the future.

‘It’s not even that people are looking for flexibility for the time to be at work or go home from work’, he says. ‘It’s just that they want to be able to do things from home rather than be stuck in the office until 9pm.’

‘If they can leave earlier and go home and put their kids to bed, or do some gym work or something and then log back on, that means a lot to people, and is of benefit to the company’, says Morris.