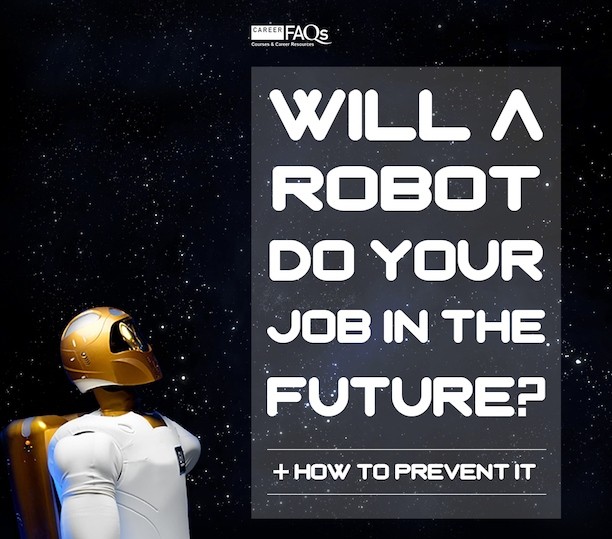 Will A Robot Do Your Job In The Future? (+ How To Prevent It)

Ever since The Jetsons’ housekeeper Rosie hit the screens in 1962, it’s been easy to envision a bright shiny future where robots did all the dirty work, leaving us to bask in the glory of ‘higher-order’ tasks (like George Jetson’s delightful job of repeatedly pushing a single button all day).

The future is here.

We’re on the verge of the Fourth Industrial Revolution, meaning that Artificial Intelligence (AI) and quantum computing are fast becoming a reality.

IBM’s supercomputer, Watson, has gone from being a contestant on Jeopardy (that absolutely obliterated its human competition) to powering Ross, a cognitive megacomputer that’s helping lawyers sift through tens of thousands of legal documents to prepare for cases.

Then there’s Google’s AI bot AlphaGo which has been programmed to use deep learning algorithms to master the ancient Korean game of Go – a game that’s widely accepted to be far more complex than chess. AlphaGo’s become so smart that it recently beat legendary Go world champion Lee Sedol by a convincing 4-1.

It’s safe to say that robots are here to stay, and they want our jobs.

Is our future going to be Jetsons-like with attentive and charming Rosies, or are we headed down a dark Blade Runner-esque path where androids revolt and rebel?

The Age of Automation 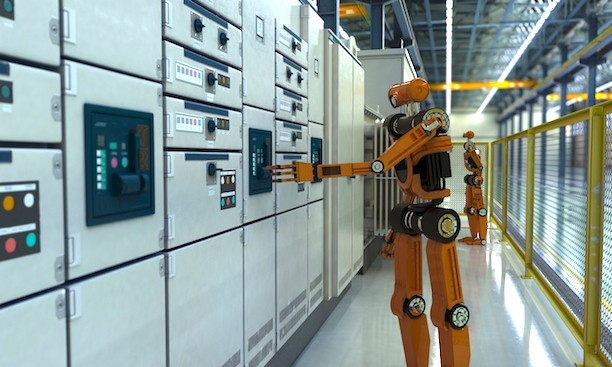 A seminal study led by Oxford academics Carl Benedikt Frey and Michael A. Osborne, titled The Future of Employment: How susceptible are jobs to computerisation? has found that within the next 20 years, a whopping 47 per cent of jobs will be lost to robots.

But let’s be honest, it’s hard to feel particularly worried.

I mean, this is going to happen in some vague distant future that only Future You has to worry about.

Well, that’s what I’d thought anyway. Until I did the research.

Industries and jobs are being automated at an alarming rate. As we speak.

In the last 2 years, Australian import and export company Patrick Stevedores has mirrored the logistics industry’s trend towards automating jobs and cut almost 50% of jobs at its Port Botany dockyard.

Apple and Samsung parts supplier Foxconn has reportedly replaced 60,000 factory workers with robots; while Adidas is piloting a new ‘Speedfactory’ this year (a facility that automates the entire shoe manufacturing process) with the aim of bringing robot-made shoes to market by 2017, thus reducing its dependency on offshore manufacturers.

Self-driving cars should be making the taxi industry very nervous, with automated taxi pods currently being trialled in England’s Milton Keynes. The construction industry is similarly scrambling to retrain staff in response to the rise of prefabricated homes with pre-wired, pre-plumbed modules.

Not to sound overly dramatic, but…

THE BOTS ARE COMING.

Which Jobs Are The Bots Gunning For? 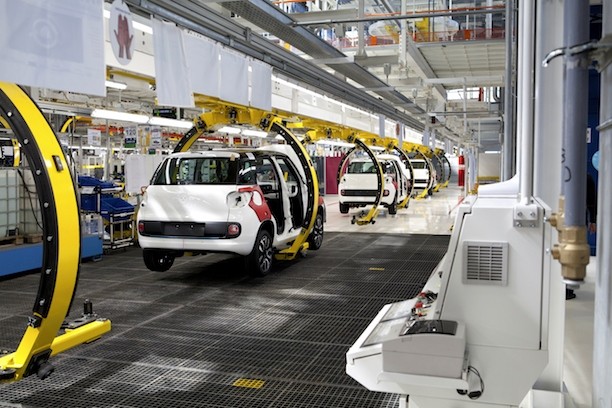 According to a seminal Oxford University study, the jobs that will be the first to go are ones with routine, repetitive and rules-based tasks that require little creative or social intelligence.

The BBC has taken Frey and Osborne’s data sets and plugged them into a nifty little calculator that gauges how at-risk your job is.

Using this awesome tool, I found that the jobs with the highest risk of automation include: 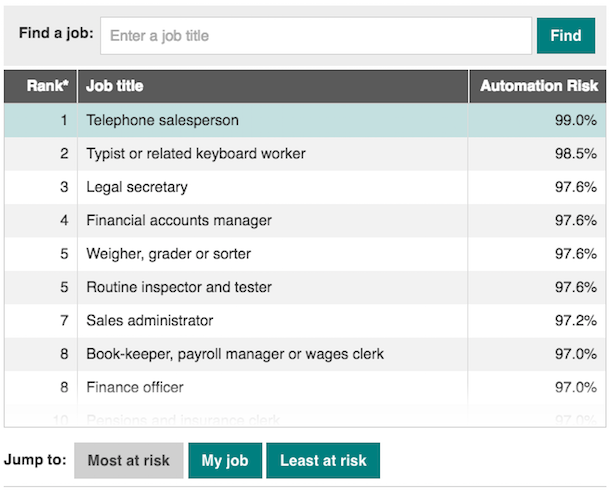 The research highlights that most workers in transportation and logistics occupations, together with the bulk of office and administrative support workers are highly susceptible to automation.

The reality is that machines will always be faster, stronger and more efficient than we can ever be at menial and repetitive tasks. Which means that low-skilled workers are the most vulnerable.

Autodesk CEO Carl Bass’ quip sums it up best: ‘The factory of the future will have only two employees: a man and a dog. The man will be there to feed the dog. The dog will be there to keep the man from touching the equipment.’

But this doesn’t mean that white-collar jobs are entirely safe either.

IBM’s Watson is the perfect example of machine learning at its best, where large sets of data can now be computerised, and applied to sectors such as law and medicine.

So what does this mean for the future of work?

Will unemployed Future You zip around town in a driverless car, receive legal advice from a robot and have a computer doctor diagnose you when you fall ill?

A Keynesian Dream Or A Sci-Fi Nightmare

It’s important to remember that since the beginning of time, technological advancements have both killed jobs and created them.

Seemingly, the inevitable shift towards automation should be no different.

What futurists and experts can’t agree on, however, is the rate at which this will happen, and whether the creation of new jobs will outstrip the pace at which jobs are made obsolete.

History suggests that when jobs are lost in a particular field, new ones are created in other sectors. But economists such as Erik Brynjolfsson point out that this may not necessarily be the case in light of exponential automation, which will be the biggest challenge our society faces over the next decade.

‘We’re going to enter a world in which there’s more wealth and less need to work,’ he told The New York Times. ‘That should be good news. But if we just put it on autopilot, there’s no guarantee this will work out.’

Brynjolfsson’s fears echo legendary economist Keynes’ prediction that widespread ‘technology unemployment’ would one day hit our global economy, ‘due to our discovery of means of economising the use of labour outrunning the pace at which we find new uses of labour’.

How To Beat The Robots At Their Own Game

With this seismic shift underfoot, it’s more important than ever to safeguard your career and future-proof your skills.

Not convinced? Let me put it another way.

If you lived in the late 1800s and were thinking of becoming a gas lamplighter, wouldn’t you appreciate someone telling you, ‘Hey you! There’s this dude named Benjamin Franklin and another dude called Thomas Edison. Put your lamplight down – we need to talk!’

So seriously, put your lamplighter down, you Luddite. Here are five ways to robot-proof your career:

1. Master things that machines suck at 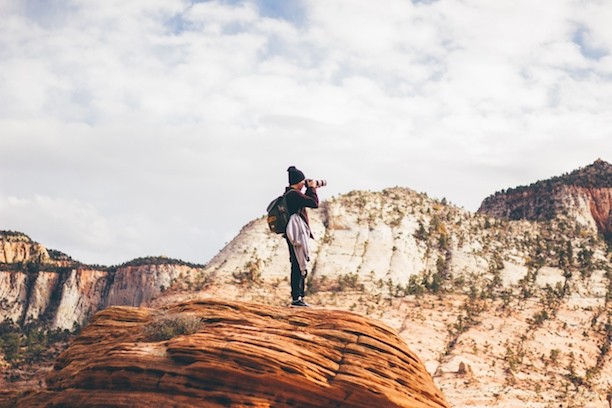 Experts agree that robots are (for the time being anyway) less imaginative and far less emotionally intelligent than us humans.

As Frey and Osborne’s study reveals, the jobs that are least likely to be automated are the ones that involved creative and social tasks.

‘We found there was a very clear, strong trend between the creative content of a job and its probability of computerisation and replacement by robots,’ Professor Osborne told The ABC.

So, if you’re in a shrinking industry or in a job that’s under the threat of automation, it’s crucial that you make an effort to equip yourself with the skills that every employer wants in the future. This can involve: 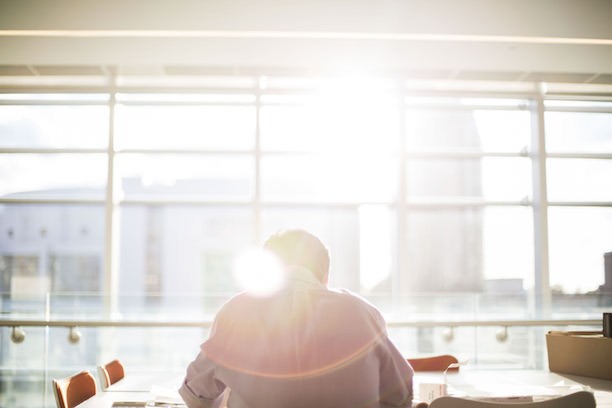 Next, what you need to do is take the skills above and pivot into a different part of the industry – one that’s far less likely to be automated.

So for example, if you’ve spent a decade working in logistics and know the dockyard like the back of your hand, amp up your communication skills and move into logistics consulting.

While logistics and shipping companies like Patrick Stevedores may have automated some dockworker jobs, they still need people (especially those with actual experience) to advise them on how to streamline processes and improve protocols. That’s not something machines are capable of doing, particularly when different ports have different layouts and idiosyncrasies that only experienced hands are aware of.

3. Retrain in a field that’s booming 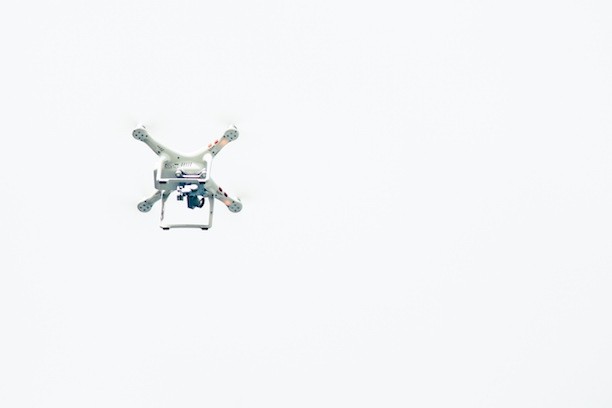 The reality is that sometimes pivoting may not be an option. If this is the case, you might need to go the whole hog and completely retrain.

But don’t just retrain in any field. Be smart about it and retrain in one that’s set to flourish far into the future.

According to Australia’s Digital Pulse, a report cowritten by Deloitte and the Australian Computer Society, the place to be right now is the Information and Communications Technology (ICT) industry.

‘Australia’s digital economy is expected to grow significantly over the coming years. This growth will be fuelled by new waves of technological developments,’ the report states. It also says that the demand for ICT workers is predicted to increase. 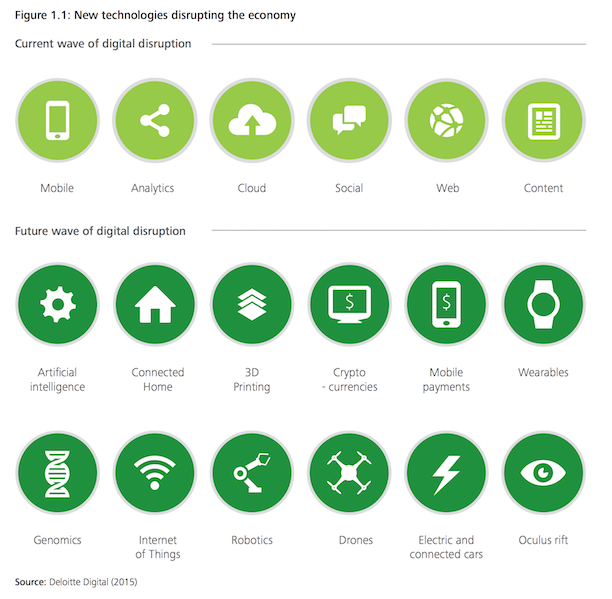 Here’s an in-depth look at the 12 industries that will be worth billions if not trillions by 2025. Fields to watch include robotics, wearable technology, 3D printing and the ‘internet of things’.

Interestingly, 7 of the 10 happiest jobs of 2016 were ICT jobs; a testament to the fact that if you’ve got a high-demand skill set, you can expect better work conditions, more benefits, a higher salary and feel happier to boot!

But if you’re not keen on IT, there are other fields to consider.

4. Retrain in a job that will always need a human touch 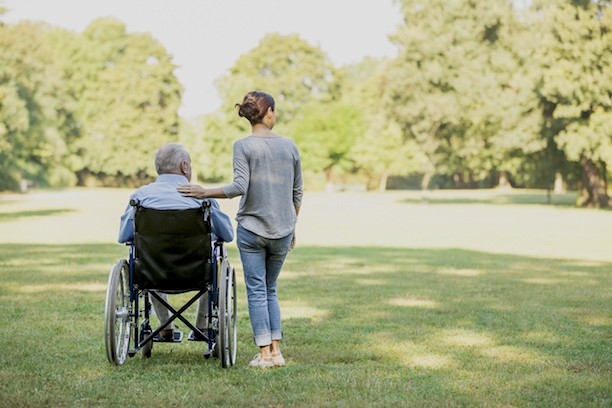 Roles that robots won’t be stealing anytime soon include social workers, nurses, therapists and psychologists – and that’s because caring for others is something that humans will always be superior at. Such roles demand a high degree of emotional intelligence, empathy and social perceptiveness – which robots don’t have (yet).

Similarly roles like designers, architects and engineers won’t be usurped by our robot friends anytime soon. Anything that requires you to think on your on your feet and come up with novel and innovative solutions puts you at an advantage.

The same goes for managerial positions where strong people skills and the ability to coordinate with others puts your job out of reach of bots and machines.

Jobs with the lowest risk of being automated (less than 2%) include:

The industries least susceptible to automation are:

5. Strike out on your own 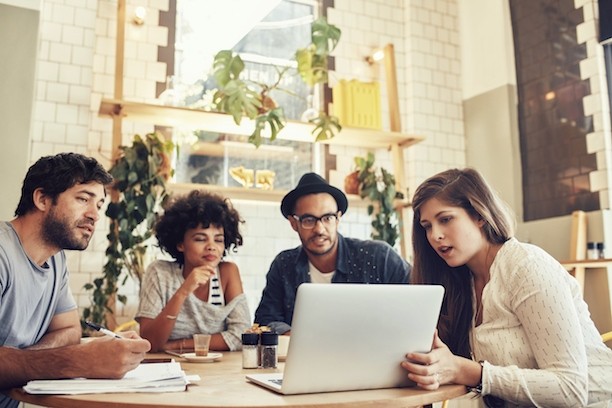 Last but not least, there’s always the option to become your own boss!

This could involve giving the old 9-5 routine the boot and working as a freelancer, or taking the plunge and starting up your own start-up.

In the face of a digital revolution, entrepreneurs will play a particularly important role in supporting the economy and creating new jobs.

As the CSIRO report Tomorrow’s Digitally Enabled Workforce points out:

‘We are seeing a focus on entrepreneurism to create new jobs, working out how to encourage new tech companies that will be competitive on the world stage, while promoting innovation through technology to transform current businesses so that they will thrive in a globally connected marketplace.’

This also has far-reaching consequences for the world as we know it. As Stephen Hawking said, ‘Everyone can enjoy a life of luxurious leisure if the machine-produced wealth is shared, or most people can end up miserably poor if the machine-owners successfully lobby against wealth redistribution.’

There’s no point in burying your head in the sand and pretending that everything’s going to be okay.

Automation is already disrupting industries at an exponential rate – from the taxi industry to transport and logistics – right through to the services industry.

The story of a dystopian future where we’re at the mercy of our robot overlords has been told hundreds of times. But while the extent of automation is yet to be seen, it’s fair to say that irrespective of what industry you work in, it’s absolutely vital to constantly be adapting, retraining, and reskilling. The future is now – get ready for it.